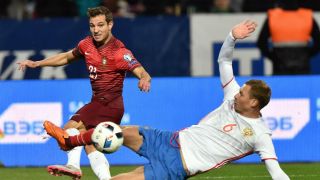 Captain Roman Shirokov scored the only goal of the game with a minute remaining to give Russia a deserved 1-0 friendly win over Portugal.

Russia peppered the Portugal goal throughout Saturday's friendly contest in Krasnodar, but were seemingly heading for a frustrating stalemate.

However, skipper Shirokov came up with the goods in the 89th minute when he side-footed home from close range to finish a fine Russia move.

It was no less than Russia deserved and the scoreline could have had more gloss with Artyom Dzyuba hitting the crossbar in the opening period, while Shirokov missed great chances in either half.

Head coach Leonid Slutsky, who is combining the role with his CSKA Moscow duties, has now won five straight matches since replacing Fabio Capello, form that saw them qualify for Euro 2016.

Portugal, who also qualified for the Euros, had won five of their last six but an experimental side - lacking captain Cristiano Ronaldo - created few clear-cut chances, with Goncalo Guedes going closest for the visitors in the first half.

Before kick-off, the teams observed an impeccable minute's silence in honour of the victims of the attacks in Paris.

When play got underway Russia enjoyed the better of the opening 20 minutes with Dzyuba causing particular problems.

First the Zenit striker was denied by a great last-ditch tackle from Pepe when shaping to shoot from eight yards, before he saw a left-foot half-volley saved by the foot of Rui Patricio and then hit the bar with a thumping header.

Russia were denied again as Shirokov was played in on the right of the area, only for the captain's low drive across goal was saved brilliantly by Patricio.

The hosts' wastefulness was almost punished when debutant Guedes glided through the Russia defence and struck a low shot from the edge of the box that Igor Akinfeev parried to safety.

Portugal were let off the hook shortly after the break, though.

Dzyuba's clever flick found Shirokov wide open in the area, but the midfielder stabbed his shot wide of the left-hand post.

Russia continued to probe and Pavel Mamaev poked a half-volley wide from the edge of the box shortly after the hour mark.

Portugal brought on Ruben Neves and Lucas Joao for their international debuts in a bid to spark some momentum.

But it did little to alter the pattern of the game and Russia had the ball in the back of the net in the 74th minute, only for Fyodor Smolov's goal to be rightly ruled out for a deliberate handball that earned the substitute a yellow card.

However, the home fans were celebrating in the final minute. Smolov's ball from the left was touched into Shirokov's path and he passed the ball past Patricio.