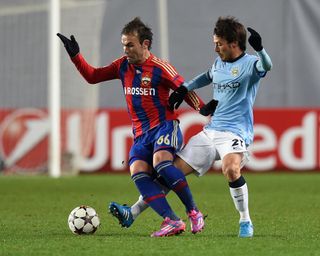 The defending champions came back from 2-0 down to secure a 2-2 UEFA Champions League draw against Manchester City in the capital last Tuesday - and they required a last-minute penalty from Bibras Natcho to ensure Sunday's trip to FC Ufa ended all-square at 3-3.

Ufa duo Maxim Semakin and Nikolai Safronidi netted either side of Natcho's first spot kick - the latter strike coming three minutes from time - but CSKA's Israel international held his nerve from 12 yards once more to snatch a point for the visitors.

By contrast, pacesetters Zenit were in rampant form - thrashing Mordovia Saransk 5-0 to extend their lead at the summit to four points.

Andre Villas Boas' team took some of the gloss off their unbeaten start to the campaign with draws in their past two Premier League outings and further dropped points appeared to be in the cards after a goalless first-half on Sunday.

But the St Petersburg outfit were transformed after the break, with Hulk, Alexandr Kerzhakov, Alex Witsel, Danny and an own-goal from Ruslan Nakhushev amounting to a harrowing 45 minutes for Modovia.

Third-placed FC Krasnodar kept up their pursuit with a 2-0 win over Terek Grozny thanks to a Joazinho spot kick and Ricardo Laborde's game-clinching goal.

In Monday's other game, Rubin Kazan triumphed at Dinamo Moscow by the same scoreline as Magomed Ozdoev and Maksim Kanunnikov found the target to move level on points with their fifth-placed opponents having played a game more.

Bottom two Arsenal Tula and Rostov were cast further adrift with losses away to fellow strugglers FC Ural and Amkar Perm - 1-0 and 2-0 on Friday and Saturday respectively.

Third-bottom Torpedo Moscow had a more profitable weekend as they shared goalless draw with fourth-placed Kuban Krasnodar, while Moscow neighbours Spartak and Lokomotiv played out a 1-1 draw with a sting in the tail.