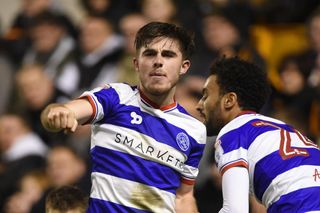 Queen’s Park Rangers’ Ryan Manning has been handed his first Republic of Ireland call-up for next month’s home double-header against New Zealand and Denmark.

Versatile midfielder Manning is included in an extended 39-man squad named by Mick McCarthy for the friendly against the All Whites on November 14 followed by the Euro 2020 clash with Denmark four days later.

McCarthy, who is set to trim his initial squad early next week, described it as a “huge” month for his squad, who clung onto top spot in Group F despite this month’s 2-0 defeat in Geneva.

McCarthy told a press conference: “This is a huge month for us and these are two very different games.

“We saw how beneficial it was to change things up for the recent Bulgaria friendly and we may well do that again against New Zealand.

“We know what we have to do against Denmark and we will look to the tried and the trusted to win that game but who knows what will happen against New Zealand?

“Maybe someone will take their chance in that match and give me something to think about.”

Sheffield Wednesday’s Keiren Westwood is included in the squad while Middlesbrough goalkeeper Darren Randolph recovers from a thigh strain, but McCarthy is hopeful Randolph will be passed fit.

He added: “Darren is hopeful that he will be fit for Denmark and he has time on his side.

“We have to plan for all eventualities, however. There is a chance that Caoimhim (Kelleher) could play for Liverpool against Arsenal in the Carabao Cup on Wednesday, while Keiren got back into the Wednesday team against Leeds last weekend and we will watch him against Blackburn this Saturday.”