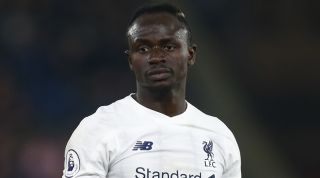 Liverpool forward Sadio Mane says the people from his home village of Bambali are his inspiration.

Mane, who was born in the south of Senegal in 1992, enjoyed a remarkable year last time out.

The former Southampton man won the Champions League, the UEFA Super Cup and the Club World Cup as a key part of Jurgen Klopp's side.

He was also named the 2019 CAF African Player of the Year ahead of Mohamed Salah and Riyad Mahrez.

And Mane says none of those accomplishments would have been possible without the support of his friends and family back in his homeland.

"I can't describe how they are and how motivated they are especially," he told Liverpool's official website. "They always push me.

"If you see those people, you push hard and harder to make them proud because it's the only satisfaction they have on it. I have to give back what they have done for me.

"I think it was something special for the village because in the village we had some great players but they were never successful.

"When I came to France and that time I was playing second league, the village never had the channel to watch the second league, so everybody was so excited to see me on TV first of all!

"They were praying for me every day to see me at this level because they will be just proud. How things are going and as I get more motivated and [they get] more excited to see me higher and higher, I think I have to sacrifice myself to make them proud."

Mane followed in the footsteps of George Weah, Roger Milla and Samuel Eto'o in being named Africa's best player last year, and he says he was delighted to collect the award.

"I would say the dream came true. When I was young I was always dreaming to be the best and this year I got it, so I'm really happy," he added.

"For sure, I'm looking forward to performing well again for my team especially and win more.

"Especially since I'm playing for Liverpool – which is a very, very, very big club in the world – winning trophies with the team can give you some opportunities to win some trophies like this.

"For sure, you have to perform well to get this [award]. I don't know if I'm doing well but I'm trying to do my best for the team and for the club!"