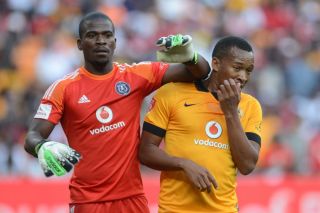 The 27-year-old Orlando Pirates goalkeeper was pronounced dead in hospital after being shot in an incident at a property on the outskirts of Johannesburg in Vosloorus on Sunday.

Meyiwa was reportedly trying to protect his girlfriend after intruders entered her house and SAFA released a statement on Monday outlining its shock over the sad news.

A statement on the governing body's official website said: "The South African Football Association (SAFA) has expressed shock and anger at the tragic and sudden passing on of Bafana Bafana and Orlando Pirates captain Senzo Robert Meyiwa.

"The goalkeeper was shot and killed in what is reported to be a robbery in Vosloorus in the East Rand on Sunday, 26 October."

Meyiwa made seven appearances for his country, captaining them on four occasions, and SAFA president Dr Danny Jordaan described him as a "pillar" of the national team.

Dr. Jordaan said: "We are shocked and devastated by the tragic news of South Africa's current number one goalkeeper and captain of Bafana Bafana.

"Here was a man who was an integral part of the revolution of our beloved national team under Shakes Mashaba. For him to leave is like this is shocking.

"As an Association we expected so much from him, the nation had pinned their hopes on him following brilliant displays in the Bafana Bafana jersey, more so in the recent AFCON matches where kept a clean sheet in all four games. We will surely miss him.

"At this time our thoughts are with his family, his club Orlando Pirates, the football family in general.

"Shakes Mashaba was going to announce his squad to face Sudan and Nigeria on Thursday and I would like to believe Senzo's name was going to be the first because he has been a pillar of Bafana Bafana in the recent matches, making incredible saves to keep the team in the match. May his soul rest in peace."