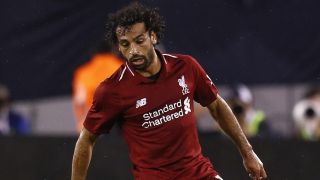 James Milner insists Mohamed Salah is not a one-season wonder, with the Liverpool veteran confident his star team-mate can enjoy another record-breaking campaign.

Liverpool forward Salah took Anfield by storm last season, scoring 44 goals in all competitions and 32 in the Premier League following his arrival from Roma.

Salah – who suffered a shoulder injury in Liverpool's Champions League final defeat to Real Madrid – walked away with the Premier League's Golden Boot and Player of the Year among other individual honours.

After enjoying a goalscoring return in Liverpool's 2-1 victory over Manchester City at the International Champions Cup on Wednesday, Milner believes the Egyptian sensation can build on his 2017-18 exploits.

"The best players in the world aren't known because they just did it in one season, they do it over and over again. He is more than capable of doing that," Milner said.

"I think obviously there is pressure when you've had one good year to deliver again. I think he's a top player, he's shown that and he's going to keep improving.

"We need to keep improving as a side with him as well and make sure that all the pressure is not on his shoulders to deliver goals and get us out of tough situations.

"It's down to all of us to help him be the best player he can and do that as part of a team."

Now that's what you call making an impact!! Follow from the bench to the scoresheet vs with our special player cam... July 26, 2018

Salah's performances alerted some of Europe's giants, with Champions League holders Madrid linked to the 26-year-old.

However, Salah signed a new five-year contract earlier in July to pledge his future to Liverpool.

"I was never worried, personally," Milner said. "There's always going to be stories when players do well. You saw how well he played last season, improving, and he seems happy so I don't see any reason why he'd want to go.

"That's what happens when you have good players. That's a positive thing for us that when there's speculation about your players it means that they are playing well and performing, and he obviously has."