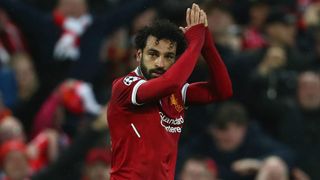 Mohamed Salah's incredible first season at Liverpool has been recognised by the Football Writers' Association, who have voted him as their Footballer of the Year ahead of Manchester City's Kevin De Bruyne.

Salah arrived at Anfield from Roma in pre-season and, although he joined with high expectations following his impressive spell in Italy, few would have predicted the impact he has had.

The Egypt international has scored 43 times in all competitions, including 31 in the Premier League to equal the record haul for a single 38-match season.

Salah adds the individual gong to the Professional Footballers' Association's (PFA) Players' Player of the Year award, having also beaten De Bruyne to that one.

OFFICIAL - Mo Salah is Footballer of the Year. Full story here May 1, 2018

Belgium international De Bruyne had been considered the favourite for both awards for much of the season, but Salah's consistent and remarkable goal-scoring form has just given him the edge, winning by 20 votes.

Salah joins Steven Gerrard and Luis Suarez in having won the award in the Premier League era while playing for Liverpool, and he is the first African to claim the prize.