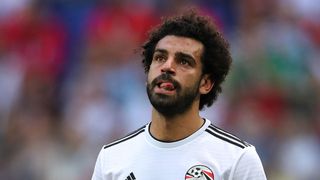 Mohamed Salah has fully recovered from the shoulder injury he suffered against Real Madrid in the Champions League final and is "full of joy" ahead of the new season, according to Liverpool manager Jurgen Klopp.

Salah dislocated his shoulder in a tangle with Sergio Ramos back in May when Liverpool were beaten 3-1 by Real Madrid, who were crowned European champions for a third year in a row.

The injury meant Salah's World Cup was disrupted, preventing him from featuring in Egypt's opener – a 1-0 defeat to Uruguay.

Salah was able to play – and score – against Russia and Saudi Arabia, but Egypt left the tournament without even registering a point.

Nevertheless, the former Roma star is back to 100 per cent and has joined up with Liverpool in the United States ahead of Sunday's International Champions Cup meeting with Borussia Dortmund.

"[He's] fully recovered, he was fine," Klopp told reporters on Saturday. "We were in close contact [with Egypt].

"He is a very serious person and he knows it's his career. If you can't [play], you can't. He looks full of joy, he's happy to be back.

"It was nice to see him and Sadio [Mane]. They had an intense year but they're really looking forward to the season.

"They did the work they had to do, they can start quicker and from another basis. The season starts August 12, so that's good."