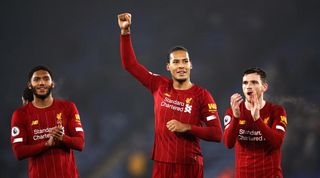 The Reds hold a 22-point advantage over second-placed Manchester City and are on the verge of winning the title for the first time since 1990.

City have scored five more goals than the table-toppers, who possess the best defensive record in the division.

And Allardyce has pointed out neither Liverpool nor City are afraid to play direct football.

"You wouldn't hear [Sky Sports commentator] Martin Tyler saying it because it would be frowned upon.

"You've got to be careful about saying Liverpool play long ball. But that's the way it is. They play long ball exceptionally well and better than anybody else. And that's why they do it.

"One of the best long-ball players is the goalkeeper at Manchester City [Ederson]. His long balls are unbelievably effective. So when you think you're tying them down he goes 'bosh' and the ball is in your box and Sergio Aguero is scoring.

"The top clubs have different ways to beat you. So this emphasis on playing out at the back is over-cooked. Over time it'll work its way out and we'll return to normality."

Allardyce has been out of work since leaving Everton at the end of the 2017/18 campaign.

And while the former England boss is still open to offers, he admits he may have taken charge of his last professional game.

"It could be a relatively well-structured and ambitious Premier League club," he said of his future employment prospects. "Albeit one that might be in trouble when you go in. Because who will sack a good manager if you're doing well? Not many.

"Or there could be an opportunity to promote a Championship club, like I did at West Ham. The West Ham journey for me was fabulous. Getting them up in the first year was an absolute joy.

"The right opportunity hasn't arisen yet. And it is harder for me to say yes than ever before. Never say never. Another opportunity in football is not beyond what I want, but I've come to terms with the idea it might not happen."