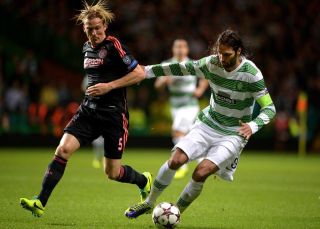 The Greek striker played the entire game as goals from James Forrest and Beram Kayal gave Neil Lennon's men a 2-1 win over the Dutch champions at Celtic Park.

It was Celtic's first win of the competition, following successive defeats to Milan and Barcelona, and Samaras believes his side can now go on to progress from the group if other results go their way.

"It was very important to win our first game in the group. It means we can still aim for second place," he said.

"We know we need to go to Amsterdam and take something positive from that match. The important thing is that we pressed them really high. It was really difficult for them to win the ball.

"We didn't do that well in the final third in the first half, but we were better in the second. We had more space to attack down the flanks and if you look at the game over the 90 minutes, we deserved to win.

"We're still alive for second place and that's the most important thing. Hopefully, Barcelona can win their next game, we get something in Amsterdam and then it will come down maybe to our home match against Milan."

Forrest completed his first 90 minutes since returning from a virus, as he scored his fifth goal of the season.

The 22-year-old believes Celtic need to keep their feet on the ground and concentrate on their forthcoming league fixture, against Partick Thistle on Sunday.

"We'll take it one game at a time now. We look forward to Amsterdam and we'll take it from there. Hopefully, we'll have a couple of players back as well, so we should be stronger," he said.

"That's the first 90 minutes since I came back (from a virus) so I'm glad I got through it. I feel good and now I'm looking forward to the next game on Sunday (against Partick Thistle)."