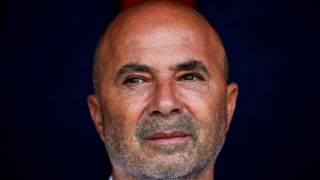 Jorge Sampaoli's Argentina future will be reviewed after he takes charge of the Under-20 side for a tournament in Valencia, it has been confirmed.

Argentina Football Association (AFA) president Claudio Tapia and vice-president Daniel Angelici met Sampaoli on Monday and it was agreed the coach will stay in charge despite the last-16 exit at the World Cup.

The former Chile and Sevilla boss was expected to be sacked after Argentina were knocked out by France, with his tactics and team selection during the tournament raising eyebrows.

But Sampaoli has been given a stay of execution after his assistant Sebastian Beccacece, who was set to lead the Under-20 squad at the COTIF L'Alcudia tournament, left his post to take over at Defensa y Justicia.

Sampaoli will now assume that responsibility for the U20 competition, which runs from July 28 until August 7.

However, the AFA said in a statement that his future will be reviewed at the next meeting of its executive committee at the end of July.

The AFA release read: "The meeting, which took place at the Ezeiza training facility and lasted about an hour, was about the performance of the national team in the World Cup.

"Meanwhile, at the next meeting of the executive committee agreed for the end of the month, the leaders will conduct a joint assessment of the coach's work until this point."