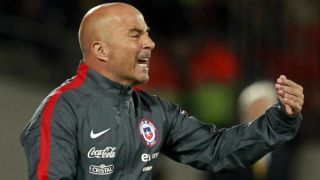 Chile coach Jorge Sampaoli has denied claims he wants to leave the country just days after being quoted as saying he was being held hostage by the Chile Football Federation (ANFP).

Sampaoli had been expected to move on after guiding Chile to Copa America glory on home soil in July.

The Argentine has been linked with moves to Brazilian and European club football, but new ANFP president Arturo Salah wants to hold the 55-year-old to the terms of his contract, which does not expire until after the 2018 World Cup.

On Monday Sampaoli was quoted as telling Radio Agricultura he was being held "like a hostage, against my will" and claimed he "would not want to work or live in the country" after coming under suspicion, along with former ANFP chief Sergio Jadue, of tax evasion.

The former Universidad de Chile coach on Wednesday sought to explain those remarks, blaming "malicious people" for trying to force him out of his post.

"I think that Chilean society has to know the truth," he told a news conference.

"It is not true I do not want to live or work in Chile … I experienced unforgettable moments [here] … and [I] plan to continue living in Santiago.

"My contract was leaked and my confidentiality violated to damage my image and that of the country. It is speculated that [I] had accounts with tax havens and [that] made me look like a person who evaded taxes, but official bodies publicly [denied] this information.

"All this has affected me too. I'm part of a successful process, not an idol, but a party that delivered the best [results] to create … joy [for] the country.

"I want to say that this situation was not created by me, but by malicious people who want me out of the [national team set-up]. They tried to harm me and the country."