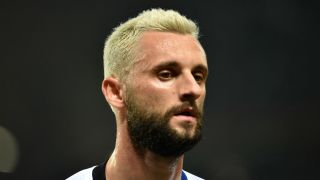 Marcelo Brozovic's sensational 94th-minute strike saw Inter dramatically down Sampdoria 1-0 in Serie A, after both sides had goals disallowed by VAR.

The video review system took centre stage shortly before half-time at Stadio Luigi Ferraris, when Radja Nainggolan's effort was ruled out for an offside against Antonio Candreva in the build-up.

VAR was twice called on in the final 10 minutes - Kwadwo Asamoah having a stunning effort disallowed due to the ball going out of play, before Gregoire Defrel's goal was chalked off for offside.

But there was one more twist when Brozovic thumped home in stoppage time to secure a much-needed league victory for Inter boss Luciano Spalletti, who was sent to the stands following his celebrations.

| FT Sampdoria 0-1 InterTakes some getting used to all this late drama! in stoppage time to win it! GET IN THERE!September 22, 2018

Fabio Quagliarella tried for another trademark wondergoal in the second minute with an acrobatic attempt that forced Samir Handanovic into action.

Nainggolan thought he had thumped Inter ahead with a superb strike three minutes before the interval, only for VAR to overturn the decision due to Candreva being in an illegal position.

Inter's bad luck carried on after the restart, Candreva's deflected shot clattering away off the left upright before Mauro Icardi twice headed wide.

Asamoah's fierce drive seemed to have finally got Inter the win, but VAR again came to the fore with Candreva adjudged to have let the ball run out before cutting back to the Ghanaian.

In incredible scenes Defrel took his shirt off in celebration when he slotted home what he thought was the winner in the 89th minute, though a review enabled referee Marco Guida to pull back play and book the striker.

However, it was Brozovic who would have the final say, drilling home with a powerful low finish to hand Inter the spoils.

What it means: Inter leave it late yet again

It looked as though Matias Vecino's last-gasp winner against Tottenham in the Champions League on Tuesday would be another false start for Inter, but Spalletti's side showed their resilience and grit once more to secure just a second triumph in five Serie A matches.

It has been a difficult period for Brozovic, who has lacked his usual composure and consistency in the opening weeks of the season following his wonderful displays for Croatia at the World Cup. That winner, however, taken with such assurance, could well kick-start his campaign.

Icardi netted his first goal of the season in fine fashion against Tottenham, but a first Serie A strike of the season continues to evade him. He was feeding off scraps for much of Saturday's clash, but the Argentine's overall performance was poor, and when the big chances did come his way, he failed to convert.

Sampdoria face a trip to Cagliari on Wednesday, while Inter welcome high-flying Fiorentina to San Siro 24 hours prior.