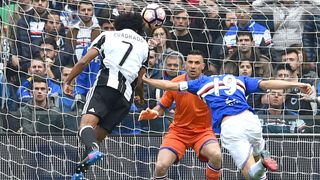 Juventus put the brakes on Sampdoria's Serie A resurgence with a straightforward 1-0 win at Stadio Luigi Ferraris despite losing Paulo Dybala to injury.

Samp were unbeaten in seven when the champions arrived in Genova, but Juan Cuadrado's first-half goal gave Massimiliano Allegri's men an early lead that they protected for 83 minutes without being unduly troubled by their hosts.

Dybala broke down just before the half-hour mark with an apparent thigh injury and Allegri did not hesitate to replace the influential forward, who could miss Argentina's forthcoming World Cup qualifiers against Chile and Bolivia depending on the extent of the problem.

Juve will use the international break to prepare for a hectic month in April, when they face Napoli in Serie A and the Coppa Italia, as well as Barcelona in the Champions League quarter-final, and Allegri will hope the confident, resolute approach seen on Sunday is still in evidence by then.

Samp coach Marco Giampaolo saw his side offer up a spirited display, but the clinical manner in which the game was effectively won inside the opening 10 minutes showed the gulf in class between the two sides.

Juve showed no signs of fatigue amid a busy run of league, cup and Champions League fixtures and they took the lead after seven minutes of a high-tempo opening to the game.

Kwadwo Asamoah sent over a wickedly curling cross from the left and Samp captain Vasco Regini could not prevent Cuadrado from plundering the ball into the net with a flying header and claiming his second Serie A goal of the season.

Man of the moment beats his marker to head home powerfully from 's cross. Just what the doctor ordered! 0-1!March 19, 2017

Cuadrado was in mischievous mood and the hosts struggled to deal with his jinking runs down the right flank. He twice fed Gonzalo Higuain for close-range chances, but goalkeeper Christian Puggioni saved both of the burly striker's attempts.

Everything was going Juve's way until the talismanic Dybala, who had scored four goals in his previous four games, went down holding his thigh after 28 minutes and had to be replaced by Marko Pjaca, but the visitors withstood a number of attacks before Higuain drew another excellent save from Puggioni on the cusp of half-time.

The home side started the second half with more energy about them and Fabio Quagliarella sent a dipping shot towards the far corner of the net, but Gianluigi Buffon was equal to it.

Giampaolo sent on Czech striker Patrik Schick as he sought to ignite his attack and the 21-year-old might have levelled the game from close range had it not been for Asamoah's superb tackle.

Schick was later withdrawn with a knock and replaced by Filip Djuricic, but Samp had run out of steam by the final 15 minutes and Dennis Praet's pass across the face of goal ran loose with no player in a blue shirt there to meet it.

Dani Alves was booked for his part in a clash with Regini in the dying minutes, but the incident only served to help Juve close out the game and claim another three points towards their bid for another title.