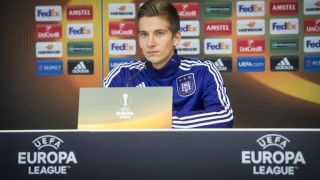 Sampdoria have announced the signing of midfielder Dennis Praet from Anderlecht.

The 22-year-old has completed a switch to Serie A after a reported fee of €10million was agreed between the clubs.

"U.C. Sampdoria announces it has acquired outright from R.S.C. Anderlecht the sporting rights of the player Dennis Praet," a club statement confirmed.

Praet is understood to have signed a five-year contract.

The creative midfielder, who has one senior cap for Belgium, has claimed three Belgian Pro League titles since making his Anderlecht debut in 2011.

He could make his debut in Sunday's Serie A clash with Atalanta at the Stadio Luigi Ferraris.