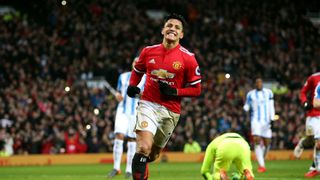 Alexis Sanchez set a new record for the amount of times possession was lost by a Manchester United player in a single Premier League game this season in his home debut against Huddersfield Town.

United ran out 2-0 winners and Sanchez scored their second at Old Trafford on Saturday, tucking home from close range after seeing his initial penalty saved by Jonas Lossl.

The Chile international was a constant threat and looked to make things happen with his direct style of play.

However, that resulted in him losing the ball more than any other United player has in a single match this term.

32 - Alexis Sanchez has lost possession of the ball more often today than any Manchester United player has in any Premier League game this season. Loose.February 3, 2018

He reached that landmark when he hit 32, before eventually finishing the match having surrendered possession on 35 occasions, according to Opta data.

Sanchez was also fouled seven times during the course of the match, more than any other Premier League player in a game this term, highlighting Huddersfield's rather aggressive tactics.

7 - No player has been fouled more often in a Premier League game this season than Alexis Sanchez was vs Huddersfield today. Targeted.February 3, 2018