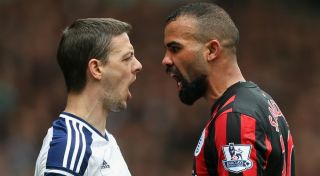 The Premier League club confirmed on Friday that the Brazil international, who last played for his country in 2012, has undergone a successful medical and joined them until the end of the season.

West Brom have the option to make the move a permanent one at the end of the campaign.

Sandro, who has been given the number 30 shirt, was delighted to make a return to Premier League football after spending the first half of the season with QPR in the Championship.

He said: "I spoke to the manager and was impressed. This is a big club and I feel happy to be here and very happy to be back in the Premier League.

"I believe I have a lot to offer. It was my first day today and I am looking forward to being part of this family.

"As a player I play with my heart, I give all I can on the pitch - all the time I want to win the ball and play the ball. I hope the fans will see the best of me during my time."

Sandro arrives at West Brom with a wealth of Premier League experience, with 98 top-flight appearances to his name between his spells with Tottenham and QPR.

West Brom boss Tony Pulis was thrilled to seal the arrival of the 26-year-old midfielder, saying: "We are delighted to bring such a quality player to the club.

"We have got a few injuries and knocks at the moment so we are pleased to be able to strengthen the squad. Sandro has a great pedigree and will be a good addition."