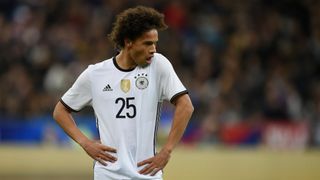 Leroy Sane's father Samy feels the prodigious Schalke attacker is old enough to make his own decision about his future amid alleged interest from Manchester City and Liverpool.

Both Premier League sides are believed to be keeping a close eye on the 19-year-old's situation at the Veltins-Arena, with City supposedly ready to make their move this January.

Schalke have so far been adamant they have no intention of selling the winger, but Sane's father would not veto a move to England if the opportunity arose.

"Of course it makes me proud to see my son catch the attention of big clubs with his good performances," Sane senior told Bild.

"But I cannot say anything about alleged offers from Manchester City or other teams.

"He knows I am always there for him if he needs my advice. We talk a lot.

"But Leroy is an adult and old enough to make his own decision on what he wants. He knows that I will always support him."

Sane has a contract with Schalke until June 2019.