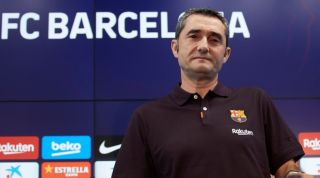 The centre-back turns 18 next month, at which point he will be free to make a switch to a European club should he want to.

Argentinian outlet TvC Sports reports that Barcelona are monitoring the centre-back’s development and plan to bring him in on a cut-price deal.

Ramos Mingo is yet to make a senior appearance or sign professional terms with the Buenos Aires giants.

It is claimed that the defender’s family were approached directly by Barca representatives, with head of youth development Jose Maria Bakero thought to be masterminding the Catalan club’s move.

The teenager went on tour with the senior Boca squad in pre-season and featured in a friendly against Chivas, while he was named on the bench for their Copa Libertadores last 16 clash with Athletico Paranaense.

Barcelona are currently on a seven-match winning run in all competitions and sit on top of the La Liga table, one point ahead of Real Madrid.

Ernesto Valverde’s side travel to Levante on league duty this Saturday before hosting Slavia Prague in the Champions League the following week.

QUIZ! Can you name these 50 football players by their nicknames?