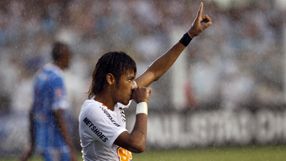 Yet Brazil's most famous club, who celebrate their 100th anniversary on Saturday, do not live only in the past.

Pele and Neymar are the biggest names of a club steeped in glory and conquests whose climb to the summit began with the arrival on the scene of "O Rei" (the king) in the mid-fifties.

This coincided with an era of Brazilian domination of world football with three titles in the four World Cups played between 1958 and 1970.

"Even today throughout the world people speak of the Santos of Pele," said former Brazil captain Carlos Alberto, a member of the great generation of players that wore Santos's iconic white strip and the country's yellow shirt.

"That take-off by Brazil to the top of football coincides exactly with Pele's Santos. Brazilian football began to win the big titles and be respected in the world through Pele's Santos and Pele's Brazil," he told Reuters in an interview.

Pele's arrival at the age of 15 changed the history of the club that was founded on April 14, 1912 and took the name of the port city on Sao Paulo state's Atlantic coast.

The team that won two Paulista championships in the first 40 years of their existence lifted 10 state and six Brazilian titles during the 18 years that Pele wore their number 10 shirt between 1956 and 1974.

On top of that, Santos were crowned South American and club world champions twice, winning the Libertadores Cup and the old Intercontinental Cup in 1962 and 1963 with Pele.

Spurred by their success and the attraction of their idol, Santos went round the world playing tournaments and exhibition matches. Two episodes show how much they were revered and loved by the crowds.

In a 1968 friendly against the Colombian national team, Pele was sent off during the first half. Players recall how the Colombian crowd forced the referee to be substituted by his reserve and Pele stayed on for the rest of the game.

In another incident, on a tour of Africa, Santos landed in the middle of a civil war in the old Congo, which had just gained its independence. Only after the rival forces agreed on a ceasefire, did Santos agree to play friendlies against the national team.

"I thank God for having put me in Santos. I was able to enjoy Santos promoting Brazil throughout the world," Pele said at this week's launching of a book on the club's centenary.

"Certainly outside Brazil, Santos is loved by everyone. In Brazil, they're everyone's second team. The only place Santos haven't been to is the moon," he said during the event at the club's Vila Belmiro ground.

Pele's departure for the New York Cosmos near the end of his career in 1975 also marked the end of a glorious era for Santos. There