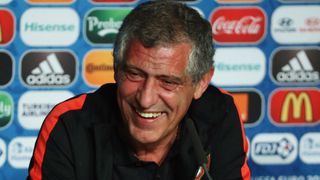 Portugal have won few friends at Euro 2016 and coach Fernando Santos does not want that to change at Sunday's final.

Santos' men laboured through a group they were favourites to dominate on paper, with three draws edging them into the last 16 as one of the four best third-place finishers.

It took until Wednesday's semi-final against Wales for Portugal to win a match within 90 minutes, with their route to Saint-Denis to take on hosts France drawing plenty of scorn.

"I want them to keep saying the same thing," said a confident Santos. "That we're this and we're that, that we won undeservedly.

"That's what I would like them to say – that we won and we didn't deserve it. That would be amazing.

Santos feels vindicated that the pre-tournament predictions of Portugal being candidates for a final berth have come to pass and he pays little mind to France's status as strong favourites to prevail at their national stadium.

"I said at the time of the draw that Portugal would possibly get to the final and win it, we were a candidate," he said.

"I always said there were three favourites – the title holders [Spain], the word champions [Germany] and France because they are playing at home.

"France are at home, they're in the final and they have a lot of potential. So they are favourites. I do not think this is odd at all to think so.

"Whether they will win or not is a whole different thing. I think Portugal will win."

Portugal will look to their captain and figurehead Cristiano Ronaldo for inspiration at the Stade de France, with Santos repeating his assertion that the Real Madrid superstar is "the best player in the world".

But the 61-year-old former Greece boss took time to praise the impact of younger players such as Sporting Lisbon's Joao Mario and teenage sensation Renato Sanches.

"They bring the irreverence of youth and sometimes they are a bit utopian because they are not aware of what is going to happen. That is sometimes very positive," he added.

"I think sometimes you need new things. You need fresh players and the young players have lots of quality. That's what they bring to the team.

"When you bring together the irreverence of youth and their experience… it's important also to have winners. I have some players, I know they are winners and they want to win."