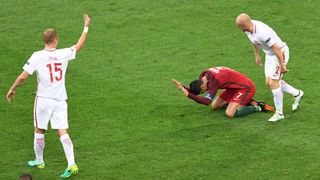 Portugal have no problem converting penalties as they demonstrated in their shoot-out victory over Poland, but coach Fernando Santos has expressed his frustration at the lack of spot-kicks awarded to his team.

Santos' Portugal secured their spot in the Euro 2016 semi-finals with a 5-3 shoot-out win after his team could not find a winner in 120 minutes, the scores tied at 1-1 at the end of extra time on Thursday.

But the Portugal coach was aggrieved that his side were not awarded a penalty when Cristiano Ronaldo - who failed to find the back of the net again in open play - appeared to be shoved in the back by Michal Pazdan.

Santos felt Portugal were also denied a penalty in their round of 16 extra-time win over Croatia, and while he said referees were doing a good job overall at the tournament, he did not want them to keep overlooking such incidents.

"I don't like talking about refs, it's a principle of mine but sometimes it's important to speak out loud," he said.

"I think the refs have been good so far and I don't question that but they didn't whistle for two penalties [one today and one against Croatia] and that could have been bad for us.

"I just ask that they are unbiased. I still believe in them, I think they're very good, I don't want them to benefit the Portugal team but I don’t want them to hurt us either."

Portugal now await the winner of the quarter-final between Wales and Belgium, and Santos is expecting a tough game.

"We face the semis the same way we have done so far. Our feet our planted solidly on the ground, we have our goals and we want our dreams to come true. We'll face a tough team whoever it is," he added.