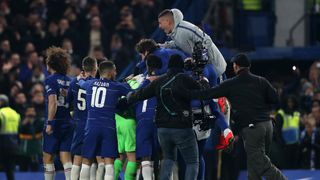 The Blues boss offered a withering assessment of the reverse at Emirates Stadium, questioning Chelsea's mentality and desire following the Premier League clash.

Tottenham were on the receiving end of a reaction as N'Golo Kante and Eden Hazard gave Chelsea a 2-0 half-time lead, overturning the 1-0 deficit from the first leg at Wembley.

Fernando Llorente levelled the aggregate score after the break but Eric Dier and Lucas Moura erred in the shoot-out as Chelsea prevailed 4-2, booking a Wembley date against holders Manchester City next month.

Speaking at a post-match news conference, Sarri was keen to stress he did not attack his players over the Arsenal performance, he merely pointed out problems he hopes Thursday's result can be a catalyst to tackle.

"I think that they reacted really very well, but I didn't attack my players," he said.

"I only said that we had a problem. The reaction was really very good, but I think we need to have motivation with continuity now.

"I was really very happy with the performance before the penalties. Of course, now, it's better because we are able to play in a final, a very difficult final but we will go to play.

"I think that, in the last three or four matches, we had a problem. A problem was the motivation, and the other problem was that the players stopped to have fun on the pitch.

"So I think that now, with this performance and the result, we can find again enthusiasm. So it's very important."

No Chelsea player on top form exemplifies such enthusiasm better than Hazard, who produced numerous flashes of his brilliant best.

"I had fun, for 65 minutes [watching] Hazard... 70 or 75," said Sarri, who urged his star forward to do his talking on the pitch and questioned his leadership capabilities this week.

"He was a bit tired in the last part of the match but he ran a lot I think. He played fantastically, a wonderful match."

Hazard was stationed back on the left of Chelsea's front three, with Olivier Giroud keeping the centre forward spot warm for new signing Gonzalo Higuain, who watched on from the stands.

"I think the position is not a big problem," Sarri added, discussing Hazard being freed from false nine duties.

"So I think that his qualities are more important than his position."