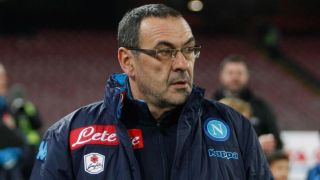 Napoli coach Maurizio Sarri admitted it is "possible" he used homophobic language in a touchline row with Inter counterpart Roberto Mancini during Tuesday's Coppa Italia quarter-final, but claimed he cannot remember exactly what he said.

After Adem Ljajic put Inter 2-0 ahead in stoppage time, Sarri and Mancini clashed on the touchline with Mancini later accusing Sarri of using racist and homophobic language.

Sarri said the row should stay on the pitch and admitted it was "possible" he had used a homophobic slur against Mancini in the heat of the moment.

Mancini accused Sarri of calling him "finocchio" and "frocio", which are both homophobic slurs in Italian, and called Napoli's coach a "racist".

When asked by reporters if he used homophobic language in the row with Mancini, Sarri said: "I can't remember, it’s possible.

"I was fired up and angry, so I’m not sure what I said. Adrenaline does strange things to people and can trip you up.

"Am I homophobic? That seems over the top. I was just irritable."

After his team's 2-0 defeat, Sarri added: "As far as I’m concerned, it was part of the game and at the 90th minute it’s all over.

"It was the kind of argument that people have on the touchline or on the pitch. I apologised to him in the locker room, but I expected him to apologise to me too.