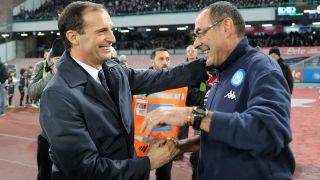 Italian Football Federation (FIGC) sub-commissioner Alessandro Costacurta is confident Maurizio Sarri and Massimiliano Allegri "wouldn't be bad" options as Italy's next coach, but accepts they are unattainable for the time being.

Sarri and Allegri are locked in a battle for the Serie A title with their respective clubs Napoli and Juventus this season, with the two teams head and shoulders above the rest in Italy's top flight.

Their names have often been linked as potential targets for the FIGC as they look for Gian Piero Ventura's full-time replacement as Italy coach, following the 70-year-old's sacking in November after Italy's failure to qualify for the World Cup.

Italy Under-21 boss Luigi Di Biagio has since been installed as interim head coach for friendlies with Argentina and England, but the FIGC are thinking bigger for their long-term appointment, with Antonio Conte also among those said to be attracting interest from Costacurta and his colleagues.

Interim Coach Luigi gets to work to plan for Italy's upcoming friendlies in Manchester and London.February 8, 2018

Speaking about the prospect of Sarri or Allegri taking charge, Costacurta told reporters: "Damn, they wouldn't be bad.

"I think Italian coaches are the world's best and there's a wide variety of people who could fit our ideal profile to take charge of the national team.

"They are under contract, though. Two months from now the situation could be different, but as of this moment, there is nothing new [to say].

"If anything happens, you will know about it and we can update, but at the moment, even doing interviews would be difficult for me, the Federation and especially the coaches who are under contract."