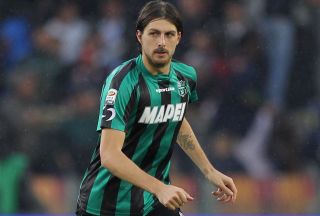 Acerbi was found to have abnormal levels of the hormone human chorionic gonadotropin (hCG) in his blood stream - a substance produced by cancerous cells - after his side's Serie A match with Genoa on December 1, incurring a suspension from the Italian National Olympic Committee (CONI).

Although a naturally occurring substance, hCG produces effects similar to anabolic steroids, and is therefore a banned substance in many sports.

However, a Sassuolo statement from December 20 confirmed Acerbi's relapse, which is thought to have resulted in the elevated levels of hCG in his system.

Acerbi is undergoing treatment, and would not have been able to play regardless, but he will remain officially suspended until his hearing on January 8.

The former Milan man, who received an Italy call-up in August 2012, has previously professed his innocence and expressed anger at being labelled a drug cheat.