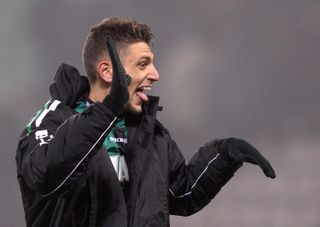 The 19-year-old forward, on loan at Sassuolo as part of a co-ownership deal with Juventus, was the match-winner as his side moved out of the Serie A relegation zone with a 4-3 home win.

Milan had taken a two-goal lead in midfielder Keisuke Honda's first game for the club thanks to goals from Robinho and Mario Balotelli, only for Beradi to take over and put the visitors in charge before Ricardo Montolivo netted a late third for the hosts.

Beradi was quick to pay tribute to Acerbi, who recently suffered a relapse of his testicular cancer, and Di Francesco, whose role at the relegation-threatened club had been reportedly been in jeopardy.

"It is an evening I will certainly never forget," Beradi told Sky Sport Italia. "I am happy for the four goals, but above all because this was an important win for Sassuolo and we really needed that boost.

"I dedicate the goals to our friend Francesco Acerbi, my family, my girlfriend and coach Eusebio Di Francesco.

"It has been a tough time this week with rumours about whether the coach would leave or not, so this win may well be decisive for his time here. We're glad to keep him, as he took us into Serie A and has a huge heart, just like the players."

Meanwhile, Di Francesco praised Beradi for his display in a game that marked Sassuolo's first win in six league matches.

"I went back to how we played last season, with a 4-3-3, and realised we were able to spread the play better," Di Francesco explained.

"I am pleased that all the goals were well-worked team moves co-ordinated with Berardi’s movement.

"He is a player who can make the difference. I gave him his debut and he is ideal for the 4-3-3, as he brings quality and hard work.

"He knew this was a very important match and gave what he needed to."