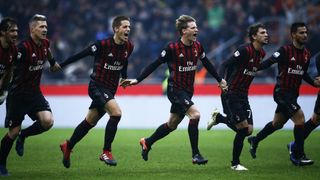 Forget about the Scudetto, former AC Milan midfielder Dejan Savicevic says the Serie A giants must focus their attention on just qualifying for next season's Champions League.

After years of underachieving, 18-time Italian champions Milan are flying high this season as talk of winning the title intensifies following Sunday's hard-fought victory at home to Crotone.

Gianluca Lapadula scored a late winner to lift Milan to a 2-1 win and keep the club within four points of Serie A leaders and five-time defending champions Juventus.

But Milan Hall of Fame star Savicevic, who won three Scudetti and the Champions League during his six years at San Siro, insists it is paramount for Milan to end their three-season absence from Europe.

Speaking exclusively to Omnisport, Savicevic - president of Montenegro's Football Association - said: "I think that the most important thing for Milan this season is to qualify for the Champions League.

"Four teams on top are close with points and it is pity because they didn't win in derby with Inter. It would be great for team to have two more points from that match.

"There are many games until the end of the season and I hope with all of my heart that Milan will qualify for Champions League next season.

"It would be great for club and all supporters."

Savicevic added: "Milan is a big club, with a lot of supporters and great history.

"It's hard to see that club is struggling to maintain on high level, like it was when I was playing for black and red.

"Other European clubs are far away on financial level, Real Madrid, Barcelona, Manchester United and City, Juventus in Italy, and it's been hard for Milan to chase them and make good results."

Milan have suffered a steady downward spiral since winning the Scudetto in 2010-11, but head coach Vincenzo Montella is leading their resurgence.

In his first season at the helm after replacing Sinisa Mihajlovic, Montella has Milan third in the table with 10 wins from 15 matches and only drift of second-placed Roma on goal difference.

"I hope that future is brighter for Milan," 1991 Ballon d'Or runner-up Savicevic said.

"Montella is doing a good job, him and the team are rising. They are fighting for a Champions League place and that is good result when you take into consideration players that he has on disposal."

Montella has placed a lot of faith in Milan's youth, with a strong core of home-grown talent helping the club dream again.

Led by teenage sensation goalkeeper Gianluigi Donnarumma, 18-year-old midfielder Manuel Locatelli - who netted the match-winner against Juventus in October - and Italy international defender Alessio Romagnoli, the trio have sparked renewed optimism in the city and Savicevic continued: "All of them are good players and they are important for current results of the club.

"They are young and talented players and if they continue to develop like this their future will be good."