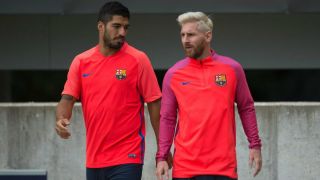 Barcelona vice-president Jordi Mestre said the Spanish champions are "very disappointed and angry" with UEFA's decision to overlook Lionel Messi and Luis Suarez for the Best Player in Europe Award, branding the pair's snub as "scandalous".

Messi and Suarez were not among the three finalists for the award, with Real Madrid duo Cristiano Ronaldo and Gareth Bale, and Atletico Madrid's Antoine Griezmann selected.

"It doesn't seem the right decision to me at all," Mestre told TV3.

"I don't know what criteria UEFA applied, with all respect to the chosen winners, but I disagree [with the choices].

"That our players aren't there, such as Suarez or Messi, is scandalous.

"The club are very disappointed and angry."

Messi starred against as Barca successfully retained their LaLiga crown in 2015-16, scoring 41 goals in all competitions - 26 of those in the league.