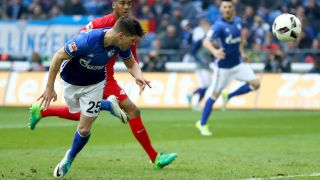 RB Leipzig failed to take their chance to close in on Bundesliga leaders Bayern Munich as Klaas-Jan Huntelaar's second-half equaliser held them to a 1-1 draw at Schalke.

Leipzig knew they would close the gap to Bayern – who they still have to play on May 13 – to six points with a win at the Veltins Arena following the reigning champions' draw with Mainz on Saturday and got off to a fine start.

Bernardo sent in a dangerous cross and Timo Werner beat goalkeeper Ralph Fahrmann with a fine header to open the scoring inside 14 minutes, his 17th league goal of the season.

Schalke refused to throw in the towel, though, and Huntelaar restored parity early in the second half, heading home from close range after a cross from Daniel Caligiuri for his first Bundesliga goal since last September.

Marcel Sabitzer came close to winning it for Leipzig with 10 minutes left on the clock, but the winger's sublime free-kick went inches over as it ended all square.