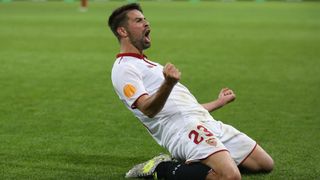 Coke is primed to swap Sevilla for Schalke after the Bundesliga club announced a deal was in its final stages.

The 29-year-old full-back passed a medical on Sunday and will on Monday complete the "last formalities" of the deal.

Captain Coke has been an integral part of the Sevilla side that claimed a record three consecutive Europa League titles, scoring twice in May's 3-1 final victory over Liverpool.

He leaves after five years at the Ramon Sanchez Pizjuan and joins a Schalke side already boosted by the arrival of young Belgium striker Breel Embolo.

Schalke finished fifth last season under Andre Breitenreiter, who has since been succeeded by Markus Weinzierl.