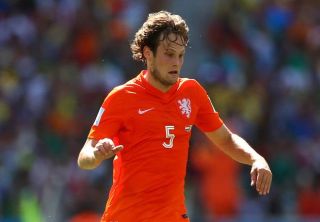 Blind is expected to sign for United in the coming days after the Premier League club announced on Saturday that they have had an offer - which Ajax later confirmed to be €17.5 million (£13.8m) - accepted for the player.

The 24-year-old starred for the Netherlands at this year's World Cup under now-United manager Louis van Gaal.

But Blind's versatility may also be his downfall, according to United icon Scholes, who feels the player may be forced into central midfield.

"I'm not too sure what position he is going to play in," Scholes told BT Sport when asked where Blind - primarily used as a left wing-back for the Netherlands - would fit in.

"I don't think he is strong enough for a left-back in England.

"And the only place we can seem to get him into the team in central midfield. He's a very good footballer but is he the answer? We will wait and see.

"We don't really know what position he is. United are not in a position now to be taking risks.

"They need proper central midfield players. They obviously haven't fancied them or haven't been able to get them.

"I think he's a really good footballer but is he a central midfielder?"

Blind will sit out Ajax's Eredivisie trip to Groningen on Sunday as he undergoes a medical and discusses personal terms with United.

Should his switch to Old Trafford be completed, he will become Van Gaal's third signing as United manager, following the arrivals of Angel di Maria - for a British transfer record of £59.7m - and Marcos Rojo.