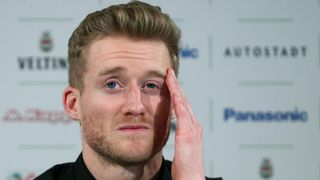 Germany international Schurrle completed his return to the Bundesliga for a reported £22 million, having failed to hold down a first-team place at Stamford Bridge.

Schurrle is said to have agreed terms early on in the negotiations, but talks between the clubs took the deal perilously close to the transfer deadline.

"Towards the end, everything did draw out somewhat, which was stressful for me and really frayed my nerves," he said. "Now I am finally at VfL Wolfsburg and I am very, very happy about that.

"It wasn't my first transfer, so I was aware that these things can take longer than expected before all parties have agreed on the terms.

"That considered, I was a little tense, because I really wanted to make the move to Wolfsburg.

"Despite that though, I was always pretty convinced that it would work out in the end."

"Wolfsburg made their interest known very early on. I took a look at the team and the prospects of the club, which seem very good.

"For me it quickly became apparent where the journey was going to take me."

Schurrle was part of Germany's World Cup-winning squad in Brazil last year, and says he took advice from national team coach Joachim Low ahead of his move.

"I chose to speak to him about it because we have a good understanding of one another and I rate his opinion very highly," he added. "He told me what he honestly thinks, which he also did before my moves to Leverkusen and to Chelsea.