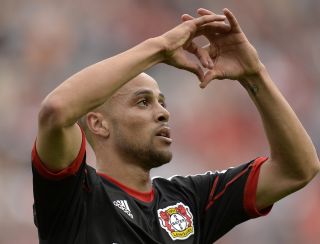 Sam has scored six goals and provided four assists this Bundesliga season, to sit equal-top of the golden boot standings and helping Leverkusen to within one point of league leaders Bayern Munich through eight games.

Sam - a four-time capped German international - said he was thrilled with his goal-scoring form.

Last time out, Sam scored the equaliser against Bayern at the BayArena in a 1-1 draw against the European champions and the 25-year-old said his side backed themselves in against any opposition.

"We aim to win every game and we don't need to be afraid of anybody," Sam said.

"We just have to keep putting in 100 per cent effort and focus, and then we're always capable."

The former Hamburg and Kaiserslautern man said Leverkusen will have to rely on the star-studded Bayern to slip up, if they are to add the Bundesliga title to the trophy cabinet in 2013-14.

"Obviously Bayern are always there or thereabouts at the top, all you can do is maybe wait for them to slip up in one or two games and try and make sure you win yourself at the same time," Sam said.

"Then you might just be in with a shout, but you never know."

Kiessling, last year's golden boot winner in the Bundesliga, said his team-mates enjoyed not always taking the glory by scoring.

"We combine well together, and we're always looking to play each other in, so hopefully we can keep it going," Kiessling said.