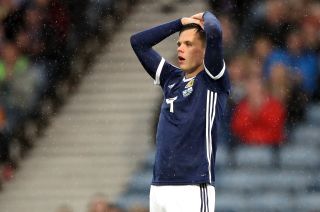 Dundee United boss Micky Mellon has warned Steve Clarke he may not be able to call on Lawrence Shankland for next month’s Scotland clashes.

The striker has been named in Clarke’s squad for the Nations League double-header with Israel and the Czech Republic.

But Shankland has not featured since United’s opening-day defeat to St Johnstone after picking up an ankle knock.

The 25-year-old – who scored his first goal for his country in a Hampden Park clash with minnows San Marino last season – is making a rapid recovery according to Mellon.

But while Mellon is eager for Shankland to pull on a dark-blue jersey, he has warned Clarke that international dates on September 4 and 7 may come too soon.

Mellon – who has not given up hope Shankland could play some part against Kilmarnock on Saturday – said: “Shankland is now moving along rapidly. He’s doing multi-directional work having only previously been doing straight line work.

“He’s back into the reckoning to re-join the group. We’ll allow it as much time as possible – and that goes for Dundee United as well – until a decision comes right to our face and we have to say yes or no.

“Is there a chance he might not be fit for Scotland? Yes. If the game was today he wouldn’t play. But he is better today than he was yesterday.

“I spoke to Steve about it. I want Lawrence to stay in the Scotland squad and not feel like he’s been left outside.

“So Steve was always going to name him in the squad anyway. But the understanding is that there will come a time at some point this week where the question will be: yes or no?

“We will leave it until then, we’ll leave him in the group because he’s part of the Scotland squad and long may that continue.

“I’m delighted to see I’ve got a Scotland player here. I want more in there.

“I’d say Saturday for our game would be too early for Lawrence. There’s been too big a gap since he last trained with us and played games, so it wouldn’t be fair. Maybe we might look at the bench.

“We do need to get it right though as he’s such an important player to us. We will not risk making it any worse.”

United have taken former Rochdale midfielder Florent Hoti on trial, but Mellon admits he has been unable to cast an eye over the 19-year-old Englishman.

“I’ve been told on the phone he’s done well and he might come into my group next week once he’s tested.

“But I have been told he’s done well enough for him to come into my bubble so I can have a look at him.”