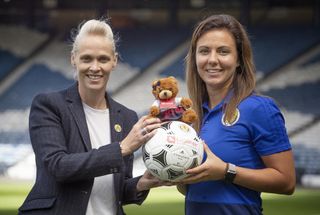 Clarke called on Scotland to follow in the footsteps of Kerr’s team who play in their first World Cup finals this summer.

Kerr, who was announcing Loganair as her team’s official airline partner, said: “It’s really kind words form Steve but I know he’s been looking at how well we have done, and he looks for our results.

“It’s always about best practice and sharing your knowledge and expertise. It’s not about the women’s team or the men’s team, it’s about integrating and working together.

“I’ll be picking his brains for sure. Tactically I’ve got a lot of admiration for him.

“The level he has worked at, who wouldn’t tap into that knowledge and expertise?

“I think it brings a real excitement about our men’s national team and it’s a great fit. He’s really proud as well to get the opportunity to lead his country.”

Clarke’s first game is against Cyprus at Hampden but Kerr will take charge at the national stadium before then.

“It’s exciting times for both national teams,” she said. “The announcement of Steve’s appointment will generate support for the game against Cyprus.

“We have our send-off game here at Hampden against Jamaica next Tuesday and we’re hoping for excess of 10,000.

“I would urge anyone who is a football fanatic to come out and support both teams.”