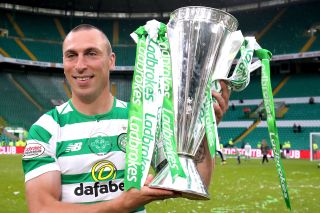 Celtic skipper Scott Brown claims it was only a matter of time before his team clinched the title.

And Brown was disappointed they did not get the chance to extend their 13-point lead over Rangers.

The Scottish Professional Football League declared Celtic champions for a ninth season running after Premiership clubs agreed there was no way the campaign could be finished amid the coronavirus pandemic.

Brown told Celtic TV: “We obviously wanted to play every single game but, due to the circumstances, we’ve not been able to. I think the league has done the right thing having crowned us champions, because it was only a matter of time anyway.

“We do our talking on the park, and we’ve shown over the last nine seasons with how consistent we’ve been. We wanted to continue that, we wanted to show how dominant we’ve been with the leagues as well.

“Everyone knows we had a little blip at the end of December but we went to Dubai, came back and won every single game expect from Livingston, which we drew.

“It shows the lads’ consistency and determination over the course of the season.

“We were getting better and better as the season went on, we wanted to extend our lead at the top.

“It was hard that the Friday before the Rangers-Celtic game that it got cancelled, because if we had won that we would have gone 16 points clear, and we believe we would have done that.