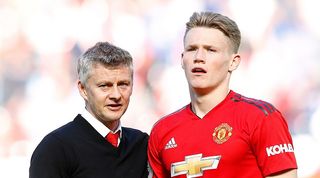 Solskjaer enjoyed a terrific start to life back at Old Trafford, but United’s form dipped after he was handed a permanent deal in March.

And the struggling Red Devils are already 13 points adrift of Premier League leaders Liverpool after winning only two of their first six games this season.

However, McTominay believes United must stick by Solskjaer having failed to win the title since Alex Ferguson’s retirement in 2013, with David Moyes, Louis van Gaal and Jose Mourinho all unable to bring the trophy back to Old Trafford.

“Once Sir Alex left, it was going to take time for the club to find the right manager, and I do believe that we have the right manager now in Ole,” the Scotland international told the Daily Mirror.

“You see different eras in football teams – everybody goes through transitional stages and we’re going through one right now.”

“It’s vital – you have to have that ­continuity at any club. In this day and age, clubs are just willing to sack a manager, without really thinking about the consequences for how that team is going to go forward in the next five or six years.

“Ole definitely has a plan for the short term and long term, and when you’ve got a guy like that, it is important you stick by him. There’s no better place to play your football than ­ Manchester United , when ­everything’s going well.

“But when it’s not going well, it’s something we have to learn from and look to the future, ­because you can’t dwell on past seasons and the different ­managers we’ve had. That’s the past and we have to look forward with Ole and see what we can do under him.”

United will move into the top six of the Premier League if they beat Arsenal on Monday, but they could fall to 12th if the Gunners pick up their first top-flight win at Old Trafford since September 2006.