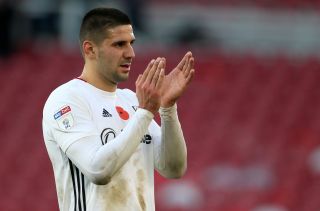 Aleksandar Mitrovic is eager to make up for lost time when Fulham face Brentford in the Sky Bet Championship play-off final, according to manager Scott Parker.

The ex-Newcastle striker only scored three times after football resumed, with his availability affected by a three-match ban and then a hamstring injury, but still ended the regular season as the division’s top goalscorer.

Mitrovic’s 26 goals came in fewer minutes than Brentford rival Ollie Watkins and the duo will go head-to-head at Wembley on Tuesday.

A lot of the focus in the build-up to the fixture has been on the Bees ‘BMW’ strike force of Said Benrahma, Bryan Mbeumo and Watkins, but Fulham possess their own secret weapon with their talisman fit again.

“He has missed a lot of football since lockdown finished,” Parker said. “He obviously had his suspension and then he has had to come out of the side through a slight injury.

“There is no bigger stage than now and 26 goals, the top goalscorer in the league, he has worked for this moment to be able to take to the field and help us achieve what we want to achieve.

“This is what you work for and what we’ve all worked for so we are all looking forward to going there and trying to perform.”

Sports financial analysts Deloitte predict Brentford could earn £160million over three years if they beat Fulham and the story of Thomas Frank’s young guns has captured the imagination of neutrals.

The Bees also bid farewell to their Griffin Park home last month and will move into a new ground in September, but Parker has seen his group go through a journey.

Relegation from the Premier League last season hurt Fulham, especially after they spent over £100m in transfer fees ahead of their top-flight return.

Several managerial changes later and they were back in the Championship with rookie boss Parker the man to pick up the pieces.

“The fans were distant from where the team were and there were different ways. We had a lot of signings in and the whole dynamics of the place was hard.

“I realised as much as there was an element of trying to put a stamp and identity on this football team, there was a much bigger issue and something at the forefront of my mind was to bring the club back together a little bit.

“I was trying to create an environment and culture which oozed that we would be successful because all successful clubs and businesses, it comes from a core foundation.”

Fulham and Brentford, who both finished on 81 points, have one final fixture left to play to decide who follows Leeds and West Brom into the Premier League.

Southampton midfielder Harrison Reed could be in the top flight next season regardless of what happens at Wembley, but he is desperate to help loan club Fulham get there.

“We go into this game full of confidence and we know if we turn up, we can get the job done,” the 25-year-old said.

“I feel like this season has probably been the year where I’ve come on the most and that is down to the staff and the players I’ve trained with.

“Then it is down to me to go out on the pitch and perform. I am happy with my form of late, but there is still more to come.”