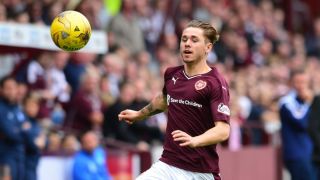 Hearts' dream start to life back in the Scottish Premiership continued on Saturday with a convincing 3-0 win over Partick Thistle that keeps them two points above Celtic.

Robbie Neilson's men have stolen a march on the champions to set the early pace and continued in that vein after Celtic ran out 3-1 winners at Dundee United earlier in the day.

Hearts were made to wait to seal their victory, but Nicholson made it two when he converted a rebound after Juanma's penalty was saved.

The Spaniard made amends for his spot-kick failure with a delightful chip 20 minutes from time.

Celtic went 2-0 up thanks to Leigh Griffiths' early strike and a Mark Durnan own goal, before Chris Erskine's penalty on the stroke of half-time gave Dundee United hope.

But Callum McGregor capped the visitors' win with 16 minutes remaining as they showed little sign of fatigue following their midweek UEFA Champions League win over Malmo.

Carlton Morris and Louis Longridge were on target for Hamilton against Inverness Caledonian Thistle while Ross made a blistering start in their 4-0 success at Kilmarnock.

Liam Boyce and Rocco Quinn scored inside the opening five minutes with Boyce and skipper Andrew Davies rounding off the scoring before half-time.