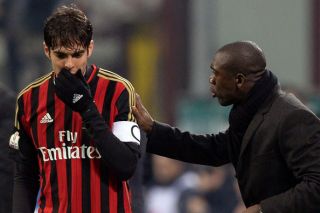 Milan, who are languishing in 11th in Serie A, were knocked out of the Coppa Italia at the quarter-final stage on Wednesday after suffering a 2-1 defeat to Udinese at the San Siro.

But despite the defeat, in a competition assistant Mauro Tassotti described before the game as the Rossoneri's best hope of European qualification, Seedorf said he was impressed with what he had seen from his players.

"I think that we started the game well tonight, we managed to score a goal, and up to conceding a penalty to Udinese I think we didn't risk a lot," the Dutchman said.

"We need time to gain that mental strength, that general strength to maintain a certain type of game for more time on the pitch and that can't obviously be built in two days.

"I really want to look ahead for us, of course we tried to win today, we weren't in an ideal situation - not to find excuses but we had four midfielders out of six injured.

"At the moment it's very important to remain calm, even if we're not in a calm situation.

"I'm here to try and keep the team calm and I'll try to convey to the guys that they need to go forward with serenity and determination in order to gain confidence and results."

Seedorf insisted that he remains positive about the rebuilding work he can do at the club moving forward.

"My idea since my first day here was to getting to know the guys and then intervene with some actions," he said.

"It's a pity we're out of Coppa Italia but we will have entire weeks to work hard and we will do our best in order to improve the situation.

"I'm here to build something good and look ahead."