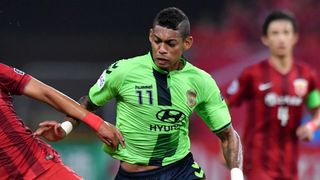 Jeonbuk Motors remain on course for a second AFC Champions League title after beating Seoul 5-3 on aggregate in the semi-final.

Although they lost the second leg 2-1, the aggregate victory in the all-Korean semi-final tie means they progress to face Al Ain of the United Arab Emirates in next month's two-legged final.

Jeonbuk - who won the title in 2006 - have now reached their third final in the last decade, while Seoul's wait for a first continental title goes on.

Choi Kang-hee's men came into the second leg at Seoul World Cup Stadium in a commanding position having won the opening match - their home leg - 4-1, powered by Leonardo's double.

All Jeonbuk had to do was avoid a disastrous return game to move into the showpiece and they did just that despite falling behind in the opening period and ultimately losing on the night.

. players and fans celebrating after booking a spot in the final! October 19, 2016

It was Seoul who made most of the running in the first half and the hosts gave themselves hope of a dramatic comeback seven minutes before half-time.

Ricardo Lopes was unable to intercept a throughball, allowing Kim Chi-woo's cut back to be converted by Adriano from close range for his 13th goal in this season's competition.

Ju Se-jong saw a shot deflect agonisingly wide after rapid counterattack early in the second half and that was the closest Seoul came to making the deficit just one before Jeonbuk all but sealed their place in the final on 59 minutes.

Lopes got the goal, collecting Kim Shin-Wook's header and turning his defender before firing his shot under goalkeeper Hyun Yoo.

That took the sting out of what had been an energetic Seoul display, although the hosts did grab a win on the night when substitute Ko Kwang-min drilled an impressive shot into the bottom corner from outside the area in the second minute of stoppage-time.