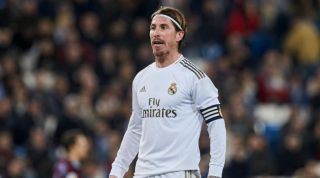 The two men will lock horns at the Santiago Bernabeu on Sunday, with Barcelona currently two points clear of their arch-rivals in the La Liga standiings.

And Ramos admits that Messi is "one of the best" as he prepares to keep the Blaugrana legend quiet.

"I wish him all the best as a fellow professional but only as long as it doesn’t affect us negatively! It’s hard, but he has my maximum respect, I think he’s one of the best."

Madrid will be desperate to avoid defeat as they attempt to climb above their rivals at the top of the table.

And Ramos says Zinedine Zidane's side know how they can hurt Barcelona based on previous meetings between the teams.

"We’ve played them many times, so we know how to trouble them. Barcelona are a team who keep possession a lot. They’re most uncomfortable when you try to take it from them. Everyone knows that, not just Real Madrid.

"Putting pressure on them high up is risky but it causes them problems. Before it didn’t happen so much, maybe because teams gave them too much respect and they would play the ball out from the back really well. But I think that’s the key: pressure high up the pitch and try to steal the ball from them, that’s when they’re most uncomfortable.

"There’s always the risk that up top they’ve got very dangerous players who can be decisive in El Clasico. Hopefully it doesn’t come to that, that we maintain our concentration from the first minute until the last and that things turn out as we want them to.

"It will be very tight. The points difference between both sides is minimal and the result could be decisive this season.

"But there’s still a long way to go, there are still a lot of points up for grabs and anything can happen. But a win would be huge for us, playing at home in front of our fans. That gives us extra motivation and satisfaction; together with them we’re stronger.

"Our rivals have to feel that, and so do we when we’re out there on the pitch. Hopefully we can make a statement with a win at home."