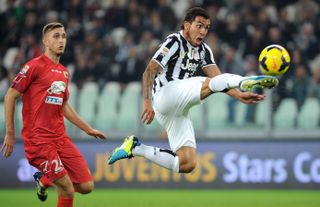 Catania posed a threat on the counter attack early on, but Juventus took a deserved lead in the 26th minute as Tevez laid the ball off for Arturo Vidal on the edge of the area and his low strike found the net via two deflections.

Juve's second goal arrived only eight minutes later as Sergio Almiron tripped compatriot Tevez just outside the visitors' area and Andrea Pirlo placed the free-kick into the top corner on his 100th appearance for the club.

The away side improved after half-time, but Juve got the third goal in the 65th minute as Tevez went around the goalkeeper and slotted home following Fernando Llorente's knock down.

A fourth duly arived with just under 20 minutes to go as substitute Sebastian Giovinco did well down the left before cutting back into the area for Leonardo Bonucci and the defender calmly found the net.

Catania's miserable night was compounded when Tiberio Guarente was sent off late one for a rash challenge on Claudio Marchisio.

Juventus had only lost once in their 12 league matches against Catania since 2006 and the visitors rarely looked like improving on that record as the champions controlled proceedings throughout.

Tevez was particularly lively in the first 10 minutes as he fired just over from 20 yards, before volleying straight at Mariano Andujar after latching on to Bonucci’s lofted pass.

Juventus had been unlucky in front of goal, but they opened the scoring 26 minutes in as Vidal’s low shot was deflected past the helpless Andujar.

A few moments later the referee ignored Tevez’s penalty claims as former Juve man Nicola Legrottaglie barged the Argentina international over, but the hosts did double their lead in the 34th minute thanks to a pin-point Pirlo free-kick.

Catania coach Luigi De Canio saw his side begin the second half well, but Bruno Petkovic spurned two chances as he headed off target from a free-kick before rounding Gianluigi Buffon and shooting wide.

Tevez put the game beyond all doubt with 25 minutes to go as he coolly took the ball past Andujar and poked into an empty net, but the hosts were not finished yet.

Juve got their fourth goal of the game 71 minutes in as Bonucci found the net from close range after good work down the left by Giovinco.

With six minutes left, Guarente received a straight red card for a tough tackle on Marchisio, compounding Catania's defeat as Juve completed a 23nd consecutive league match in which they have scored.