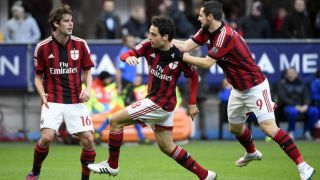 Bonaventura's low drive after 22 minutes capped a positive start to the game from the hosts, although a sparse crowd inside San Siro were not given much else to excite them before the break.

But Milan finally made sure of all three points in the 90th minute when Luca Antonelli was felled in the penalty area and substitute Pazzini stepped up to fire past Nicola Leali from 12 yards.

The win lifts Inzaghi's men above rivals Inter and into eighth position, while 19th-placed Cesena remain firmly in a relegation scrap.

After missing the last three games through injury, Riccardo Montolivo was restored to Milan’s midfield - and he went close to opening the scoring in the second minute.

The 30-year-old's low shot was parried by Leali, and the loose ball fell to Andrea Poli who headed home, but the assistant referee’s flag denied Inzaghi an early goal.

Having survived that scare, Cesena had a promising spell of possession, with Gregoire Defrel and Milan Djuric both testing Christian Abbiati - in for the suspended Diego Lopez - with long-range efforts.

Their dominance did not last, though, as the hosts broke the deadlock midway through the half, Bonaventura finding the bottom corner with a low strike across Leali from 20 yards.

Milan's opener took the sting out of any momentum Cesena had built up, and Inzaghi's team could have been further ahead as the pace and guile of Jeremy Menez created two openings that they were unable to convert.

But with half-time looming, the hosts had Abbiati to thank for preserving their lead in stoppage time, the veteran reacting well to deny Giuseppe De Feudis' volley.

A crucial clearance from Antonelli maintained Milan's advantage early in the second half, before Bonaventura was denied a second by the post.

Menez was again Cesena's tormentor with a mazy run down the left, but Bonaventura's fine effort from the penalty spot thudded against the woodwork.

The introduction of Pazzini for the ineffective Mattia Destro just after the hour gave the hosts a burst of energy in attack.

And the Italy international was on hand to calm any frayed nerves on the Milan bench when he shot low beyond Leali from the spot after Antonelli had been brought down by Carlos Carbonero.