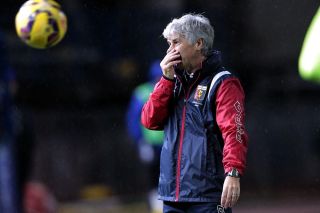 Genoa have surprised many early in the 2014-15 Serie A campaign, going eight matches unbeaten to occupy fourth spot in the standings - only adrift of third-placed Napoli on goal difference.

Gasperini's men, though, were surprisingly bundled out of the Coppa Italia on Wednesday, beaten 2-0 at Empoli in the fourth round.

It was Genoa's first defeat in all competitions since September, when they lost 1-0 at home to Sampdoria.

Gasperini said Genoa lacked "intensity" in Empoli, something he will be desperate to avoid when Milan - two points behind - make the trip to the Stadio Comunale Luigi Ferraris.

"We encountered an Empoli side in good shape, they got off to a stronger start and undoubtedly played better," Gasperini told Rai Sport afterwards on Wednesday.

"We did well in the first half but gifted them a goal and the game got complicated, as we lacked the intensity needed."

Milan are unbeaten in three games ahead of Sunday's clash after accounting for Udinese 2-0 via a Jeremy Menez brace.

Menez has scored four goals in that period, while loanee Fernando Torres has failed to find the net for Filippo Inzaghi's men but former Milan midfielder Demetrio Albertini believes the Spaniard needs time to regain his confidence.

"If you want to see the real Nino [Torres], then you have to wait," Albertini told Tuttosport.

"The current Torres is not the one we all knew. He is coming off two seasons in which he played very little, so it's not easy to find yourself after that."

Napoli - level on points with Genoa - are also in action on Sunday, playing host to Empoli in Naples.

Defending champions Juventus kick-off the round on Friday at eighth-placed Fiorentina, who have won back-to-back matches.

Title rivals Roma - who powered past Inter 4-2 last week - can keep the pressure on Juve with victory at home to high-flying Sassuolo on Saturday, while Palermo face lowly Torino on the same day.

Roberto Mancini has another chance to taste his first win as Inter boss at home to Udinese on Sunday.

In other fixtures on Sunday, Atalanta go head-to-head with second-bottom Cesena and Lazio visit cellar-dwelling Parma.

On Monday, Sampdoria can end a run of three consecutive draws by beating Hellas Verona and Chievo - one point adrift of safety - play fellow strugglers Cagliari.