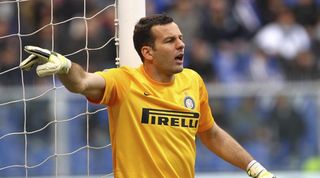 Inter coach Walter Mazzarri has been under growing pressure after a run of three league games without a win, although Sunday's 1-0 victory over Cesena - which came courtesy of Mauro Icardi's first-half penalty - lifted the gloom somewhat.

The Milan giants head into their midweek fixture four points behind in-form Sampdoria, who sit fourth, and goalkeeper Handanovic is convinced the success against Cesena can act as a catalyst for their season.

"I think we were rushing [before], trying to win the game and do everything straight away," the Slovenian told Inter's official website. "We wanted too much, too soon.

"Having said that, the important thing is the three points and we can forget about the rest.

"We'll take the points but we know we need to improve. This win [over Cesena] will give us heart and strength for Wednesday - we now need to focus on Sampdoria."

Sampdoria, by contrast to Inter, have enjoyed a superb start to the season and are yet to be beaten in Serie A this term.

However, despite their strong beginning to the campaign, Mihajlovic is refusing to get carried away.

"We must be careful - enthusiasm is okay, but [you must] keep your feet on the ground," he told Sampdoria's official website.

"I am very pleased to see what has been done by the guys.

"There is great enthusiasm on the part of each player, and that's fine as long as you're still down to earth, remembering not to lose humility."

Sampdoria duo Nenad Krsticic and Matias Silvestre have moved closer to a return to first team action having returned to training, but Roberto Soriano trained alone on Monday as a precaution.

Yann M'Vila will be absent for Inter after suffering a knee injury against Saint-Etienne in the UEFA Europa League, while Jonathan (leg) and Pablo Daniel Osvaldo (abductor) are also out.

Yuto Nagatomo and Gary Medel could return for Mazzarri's side, though, after missing Sunday's victory over Cesena.