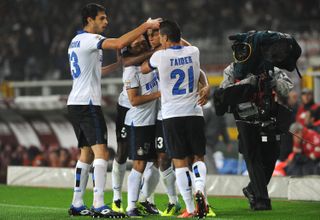 Walter Mazzarri's side dropped points against Torino last weekend, the Turin club scoring a last-minute equaliser to earn a 3-3 draw, and are now winless in three matches having faltered after a promising start to the new campaign.

Under normal circumstances, even that dip in form would not prevent them from starting as overwhelming favourites against a Verona side who were promoted as runners-up from Serie B last season, but Andrea Mandorlini's men continue to defy the pundits.

They moved into the top four by virtue of an enthralling 3-2 win over Parma last weekend, secured as Brazilian midfielder Jorginho - who has been linked with a move to Inter - netted his second of the game from the penalty spot two minutes from time.

They will be searching for their fourth consecutive triumph, and the 53-year-old Mandorlini - now in his fourth season with the club - is hopeful that their current run of form can continue.

"We are very happy with our position in the table and we certainly didn't expect it," he told Gazzetta dello Sport.

"We just need to enjoy the moment because we are going above our expectations.

"We hope this will last long."

Inter won 3-0 the last time the two sides met in the league, but they will need to produce an improved defensive display to replicate that feat after shipping six goals in their last two outings.

Goalkeeper Samir Handanovic misses out for the hosts due to suspension, but attacking midfielder Ricky Alvarez should return to fitness in time.

However, defender Hugo Campagnaro is a doubt with a thigh problem, while Javier Zanetti (Achilles), Cristian Chivu (toe) and forward Diego Milito (thigh) are all unavailable.

Verona's injury problems are less severe, with only striker Daniele Ragatzu set to miss the trip to San Siro.