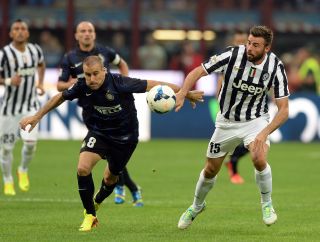 The hosts sit six points clear of Roma at the top of Serie A and, despite being held to a 1-1 draw against Lazio last time out, are on course for a third straight championship crown.

Inter, meanwhile, are 23 points off the title pace and have taken just eight points from their last nine games.

Antonio Conte's men had won 12 league games on the bounce before the Lazio result and they remain unbeaten at home in the Italian top flight since January last year.

Visiting sides have found trips to the Juventus Stadium tough, with Juve having conceded just six goals in 10 games, scoring 30 in the process.

Juve's attacking threat looks set to be improved even further with the addition of Southampton striker Pablo Daniel Osvaldo, who was in Turin for a medical on Friday and is expected to complete a return to Italy.

Osvaldo scored 27 Serie A goals during his spell at Roma and, should he make the switch, would bolster an attacking line-up that already features Carlos Tevez and Fernando Llorente.

Inter, often a title rival to Juventus in years gone by, have endured a tough start to the year - failing to win any of their five games in 2014, leaving them fifth in Serie A.

As well as crashing out of the Coppa Italia to Udinese, Walter Mazzarri's side have tasted defeat in league matches against Lazio and Genoa while earning home draws versus Catania and Chievo.

Inter could hand a debut to recent signing Danilo D'Ambrosio following his move from Torino in the week, with Lazio's Hernanes also expected to sign for Inter before Sunday.

Captain Gianluigi Buffon is suspended for Juventus due to his dismissal against Lazio, and Inter midfielder Esteban Cambiasso is likely to miss clash due to a hamstring injury.

Juventus have won 76 of the sides' 161 meetings with 40 ending in draws - the most recent of which being a 1-1 stalemate at San Siro in September.

Inter took the lead on that occasion through Mauro Icardi after 73 minutes before Arturo Vidal equalised two minutes later.