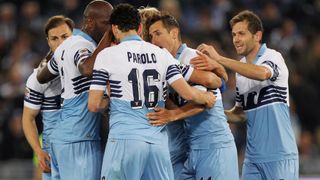 Roma and Lazio face potentially tough Serie A clashes as they look to secure their places in next season's UEFA Champions League.

Juventus are runaway league leaders as they prepare to host Cagliari on Saturday, with an eye to their Champions League semi-final second leg against Real Madrid.

But the race for second and third is still on with four league matches remaining.

Roma (64 points), Lazio (63) and Napoli (59) are battling to secure qualification to next season's Champions League.

Rudi Garcia's Roma have claimed back-to-back league wins to climb back into second, and they visit Milan on Saturday.

A trip to San Siro is not as daunting as it once was, with Filippo Inzaghi's men struggling in 11th and on a five-match winless run.

Lazio have failed to win three of their past four ahead of hosting Inter on Sunday.

Just like their city rivals, Inter have struggled this season – but they are eighth and unbeaten in six ahead of their trip to the Stadio Olimpico.

Napoli head to already-relegated Parma after a 1-1 draw against Dnipro Dnipropetrovsk in the UEFA Europa League.

Rafael Benitez's men conceded a controversial late goal at home to the Ukrainians, and need to bounce back to keep their top-three chances alive.

Fifth-placed Fiorentina visit Empoli on Sunday looking to ensure they hold onto their Europa League spot.

While Parma are relegated, Cesena and Cagliari – also in the relegation zone – can still fight their way out.

Cesena are nine points behind Atalanta and Cagliari six adrift of the 17th-placed side, who travel to Palermo.